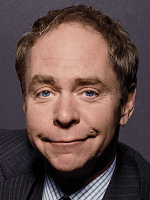 Suggestions from Juan from Texas and Ashley from Cambridge, MA. 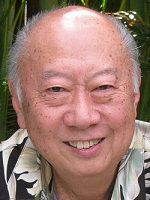 http://www.jewornotjew.com/profile.jsp?ID=1228
When I was going to college, I had a Philosophy professor swear that the secret to happiness was a BLT from D'Angelo's. Isn't college grand?
Of course, having read this, you might also wonder who the unhappiest person is. Apparently she's a divorced Native American making $1000/year living in West Virginia. Unsurprisingly, she's chosen to remain anonymous.
In any case Alvin was suggested to us by...his daughter! That's all kinds of awesome.
Posted by Yakov at 9:00 AM No comments: 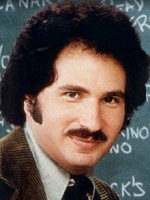 Thanks for Dave from NJ for the suggestion. 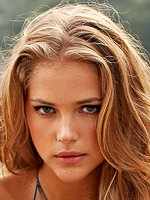 Ahem. We pretty much have the whole list covered already, with a few exceptions (mostly the Israeli models). Still... ahem.

And we're quoted on the Amanda Bynes page... 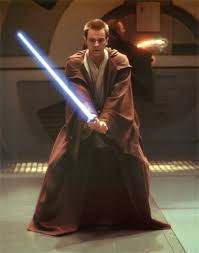 According to the most recent census in the Czech Republic, there are currently 15,000 (or so) Jedi living there. Yup, when entering their religion for the census, 15,000 Czechs answered with a fictional philosophy that isn't even really a religion. They might as well have put down Autobot or My Little Pony or "I am a huge tool wasting precious food and oxygen that could be used by actual, useful human beings.
Oh, and for the record, there are but 3000 Czechs who identify themselves as Jews. Y'know, a real religion. That's 1/5 of the people who listed fucktard, er, Jedi.
Oh those meshuggenah... Jedi?!
Posted by Yakov at 2:15 PM No comments: 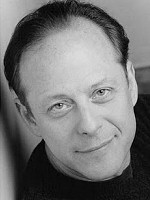 Yakov says that I've been waiting to write this profile my whole life... I say, no, only since 1986. 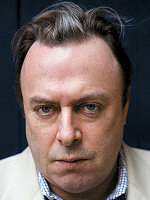 This one at the Crazy Jewish Convert blog.

Sometimes irreverent or random, it's often very thorough, and it'll give you the low down on all the pedigrees, conversions, and misinformation. 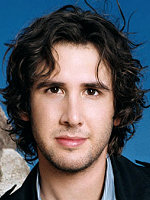 Suggestions from Valerie from Ontario, Sembler from Pennsylvania, Kevin from California, Nanetten from Largo, FL, Mila from Alexandria, Jack from LA, David from LA, Avi from Chicago, Pam from Florida, Lana from NY, Susan from California, Gord from Toronto, Shoshanah from LA, Don from LA, and Robin from New Jersey... Holy crap. 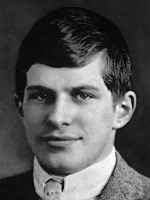 Suggestions from Pablo from Venezuela and Yaniv from Israel. 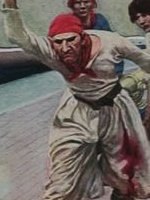 Here's the real(?) Hands pictured on a stamp from the Cayman Islands... 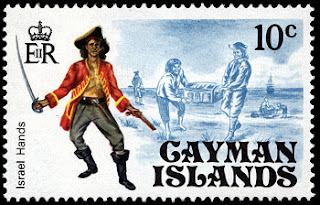 Le Blog de Marcoroz has a review of our website... Here is the Google translation.

Personally, I find this site fun and free of any unhealthy aspect, unlike a software application of the same name was a scandal recently.

And here's the translation of our Emil Jellinek article. 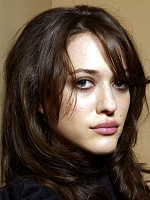 Kat also played Bob Saget's daughter... not on Full House, but on the thankfully-short-lived Raising Dad.

Kat was suggested by Yuval from Israel, Don from LA, and Ian from Florida. 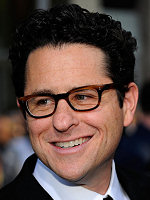 I've actually never seen an episode of "Lost". Or "Alias". But Yakov convinced me to see "Super 8", and I quite enjoyed it...

Abrams was suggested by Layla from London, Pablo from Venezuela, Esther from Canada, Jones from California, Eddie from the Netherlands, Cheryl from Passaic, NJ, and Mike from Mexico City. 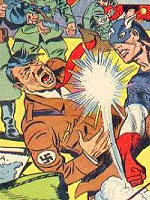 Joe Simon, the co-creator (along with fellow Jew Jack Kirby) of Captain America passed away yesterday at the age of 98. Simon, Jewish, is also credited with creating comics mainstays Captain Marvel, the (original) Sandman, and the Outsiders, amongst others.
He was, and continues to be, an inspiration to anyone who creates or enjoys comics and the many media that sprout from them. Though Simon is gone, his creations have proven everlasting.
We wish his loved ones and fans our deepest condolences on his passing.
Posted by Yakov at 1:13 PM No comments: 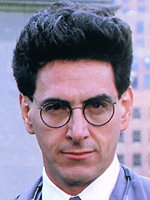 http://www.jewornotjew.com/profile.jsp?ID=1219
Ramis' most recent work was the execrable Year One, a movie I can't even spend time with when it's on cable. When it's free and you still can't watch? That's bad. On the other hand, he did direct some of the better episodes of The Office, back when that was still watchable. Sensing a trend here?
Don't worry, though, we'll totally retire the minute we become too self-involved to be good anymore. Totally.
Anyway, today's profile was suggested by Steve from the magical land of Tennessee and Jason from Allentown, PA.
Posted by Yakov at 9:00 AM No comments:

Jews in the News: Wonder how many hit dice we get?

Thanks to the fine folks at Joystiq for this one. Obsidian Entertainment, a video game company that specializes in making above average sequels of other people's IPs (Knights of the Old Republic II, Neverwinter Nights 2, Fallout: New Vegas), is currently working on an RPG (that's Role Playing Game for all the n00bs) based on South Park. This is a big deal for them since it's not a sequel, but it is someone else's IP so it's also kinda par for the course?
Anyway, Obsidian has announced that along with the standard RPG professions of Paladin, Wizard, Rogue, and Adventurer, gamers will be able to adopt the class of Jew when the game releases sometime next year (it is a South Park game, so y'know, it's a joke and should be taken as such. The concept is a joke, that is, not the idea that there will be a Jew class in the game. That's totally happening).
No word on what advantages the Jew class will bestow, though no doubt something with money will be involved. Dammit.
In the meantime, those of you who just have to play as a Jewish character right-effing-now should download the excellent Pinball FX2 game for 360/PS3. Round 2 of the Marvel Comics themed tables dropped yesterday including one based on the Jewish (though yet to be profiled) Marc Spector, aka Moon Knight.
We now return you to your regularly scheduled, non-nerdy programming.
Posted by Yakov at 1:51 PM No comments: 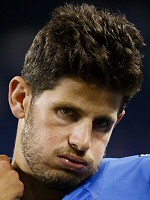 No, he probably is not the worst quarterback even if Lions history. Anyone remember Andre Ware?

Orlovsky was suggested by Bob from Rockville, MD, Robert from Cherry Hill, NJ, Mike from New Jersey, and Randy from Los Angeles. 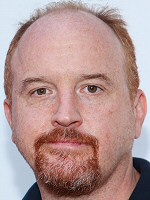 I caved and watched the two seasons of "Louie". It's... often quite good, but I wouldn't exactly call it a comedy.

Suggestions by Moishe from La Jolla, Josh from Minnesota, Jacob from Toronto, Poktanju from Michigan, Itchy from NYC, and Josh from Santa Cruz, CA. 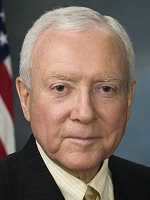 Yes, the Mormons sure love... the Jews. We know the logic behind it, but... it just doesn't sit right.

Suggestion by Gary from Sacramento. 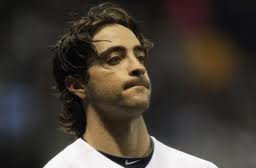 Well, how's that for prescience, huh? Yeah, I'd rather have been wrong. Dammit.
For those vacationing under a rock this past weekend, the Hebrew Hammer, the baseball messiah, the great (half-)kosher hope of Jewish baseball fans everywhere, Ryan Braun, was suspended for a positive PED test over the weekend. He will miss 50 games of the upcoming season after an unnamed, banned substance was found in his system.
Braun is appealing the suspension, claiming mystical fairies spiked his blood. We will await the results of Braun's appeal to a higher power before updating his profile.
Posted by Yakov at 2:03 PM 2 comments: 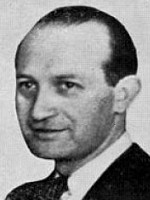 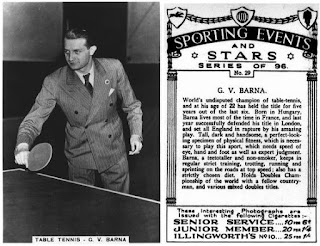 This cigarette card of Barna is beyond awesome.

Thanks to Matt from Boston for the terrific suggestion. 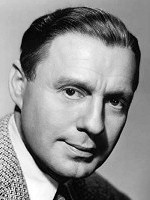 http://www.jewornotjew.com/profile.jsp?ID=1211 Benny was suggested by... a lot of people: Howard from DC, Doug from Sacramento, Frank from Tennessee, Ira from Rockland County, Rich from Bellevue, WA, Dave from Upsate New York, Jeff from New York, Melora from Idaho, Ed from Bellmore, NY, Etaoin from Canada, Bartir from California, Daniel from North Carolina, and Mark from Brookline, MA.
Posted by Zev at 9:00 AM 1 comment: 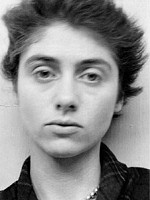 http://www.jewornotjew.com/profile.jsp?ID=1212
In all seriousness, I'm actually a fan of photography. I just thought it was a funny way of going about a profile so, well, there ya go.
Arbus was suggested by Fred from France. Fantastic find Fred!
Posted by Yakov at 9:00 AM No comments: 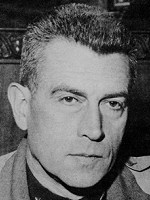 We didn't originally plan to run this on December 7th, but when it came up in the queue, it just made sense.

Not to be confused with race car driver Mauri Rose...

Rose was suggested by Ed from Olds Mar, FL, Scott from Bemidji, MN, Jerry from Virginia, and Steven from Slingerlands, NY. 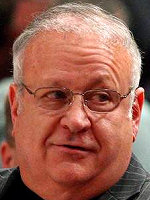 http://www.jewornotjew.com/profile.jsp?ID=1214
For the record, Zev wanted to stay away from this whole scandal as much as humanly possible, but Fine forced us into saying something (yeah, we know, not the first time. Anyway....).
So rather than spend a whole lot of time, we've crammed it all here. Feh. Let's just move on and hope this is the last of the revelations. However, I do have one last question for the faithful:
Can anyone explain to me the difference between what Joe Paterno did and what Jim Boeheim didn't do? Because I'm not sure why Paterno has been demonized (fired, legacy destroyed, name removed from the Big Ten trophy) and Boeheim has been left to move on with his life. I've yet to see that adequately explained.
In any case, Fine was suggested by Don from LA (who actually wrote us a nice poem about it), Bruce from Cambridge (who is probably our all time leader in suggestions), along with Ian from NY and Mark from Indiana (who seem like nice people, what with the suggesting and all, but who we have nothing interesting to say about). Thanks for the suggestion, guys!
Posted by Yakov at 9:00 AM 6 comments: 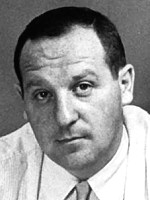 http://www.jewornotjew.com/profile.jsp?ID=1210
Roth popped up thanks to a fairly well-done documentary on the MLB Network as part of their Behind the Seams series. It's not a perfect recounting of the stats revolution in baseball (it skips the excellent work done by Baseball Prospectus, for example), but overall if you're looking for an introductory course on the history of so-called sabremetrics, you could do worse.
And probably have, considering how mainstream sports media usually treats this stuff, honestly.
Posted by Yakov at 9:00 AM 4 comments: 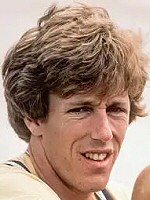 Stones was suggested by SJ from Huntington Beach, but also by Lynda from California... We couldn't say no to you, Lynda!

I'll always remember Stones fondly from The Dream League, an ESPN game show he hosted in the mid-90s... 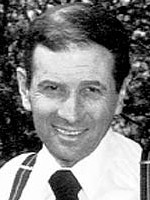 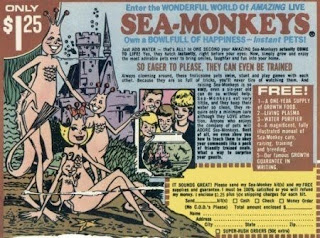 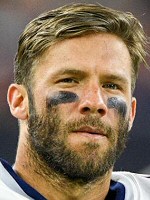