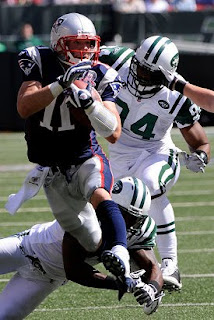 Our big thanks to the blog Kaplan's Korner, who contacted the New England Patriots about their rookie receiver, Julian Edelman:

Not, according to the Patriots’ media office, which reported that Julian, a first-year wide receiver out of Kent State “has Jewish ancestry but was raised as a Christian.”[1]

Edelman had a good game for the Patriots against the Jets in the place of injured Wes Welker, catching eight balls for 98 yards. But, since he's is "Barely a Jew", we'll emphasize the fact that the Patriots lost, 16:9.