We were trying to find a Jew from North Dakota. So... Raboy spent a few months there? That's the best we can do...

Suggestions by Ben from Berkley and Miriam from California.

Can we actually get some protagonist video game Jews?

Suggestions by Neal from Sarasota, George from Reynoldsburg, OH, Gary from South Africa, John from Baltimore, and Jonathan from Maryland.

McCullum is yet another on the list of Jewish NFLers whose career took a downturn in Minnesota...

Zoll's Wikipedia page is rather small. He deserves better.

Weider was also a bodybuilder himself. I'll leave it up to you to find the pictures...

Suggestion by Michael from Montreal.

As of Sunday, the Super Bowl teams are set, leaving us with just one question before the big game: Who to root for?

Obviously, if you're a Ravens or 49ers fan, the choice has been made for you. But what about the rest of us? Who should we as Jews put our significant psychological strength behind? Well don't worry, your football friends at JONJ have you well shmeared.

Let's break it down:

So there ya have it. We've determined that if you're Jewish, you should be rooting for the San Francisco 49ers to win the Super Bowl. And we did it in a totally rational, scientific way.

So let's go Niners! Once you have the Jews on your side, you can't lose! (now that we think about this maybe we should have pushed for the Ravens....)

Have to give props to the writer of Stern's NY Times obit.

We've been asked in the comments of this blog (and in emails) why we shifted Elvis to "Not a Jew". Well, here's an excerpt from the blog at InterfaithFamily.com. The blog is ran by Nate Bloom, who does fantastic research.

Presley was not Jewish. Yes, some sources repeat a tall tale that Presley's third cousin told 20 years ago to a Jewish biographer of Presley. This cousin said that he and Presley shared a very remote Jewish maternal ancestor (a woman who lived in the early to mid 1800s).

This biographer did no further checking on this cousin's story. She just reported it as "fact."

A detailed check of available records, including the census, shows that this maternal ancestor was not Jewish. Presley and his parents did share a two-family house in Memphis, Tennessee with a poor Orthodox rabbi and his family in the early '50s.

I spoke to the adult daughter of this rabbi. Sadly, her father, the rabbi, died young. She was a child at the time of his death and she never talked to him about Elvis.

She told me that her mother, the rabbi's wife, and Presley's mother, Gladys, were close friends. Gladys, her mother told her, never said a word about any Jewish ancestor. Her mother said that if Gladys had any knowledge of any Jewish ancestor, the mother was sure Gladys wouldn't have hesitated to mention it.

Presley worked for the rabbi's family, doing tasks Jews were not permitted to do on the Jewish Sabbath. He did this for free. The rabbi, in turn, did things like lend Presley his record player and arrange for a summer camp trip for Presley. When Presley hit it big, he made a major donation to the rabbi's religious school.

Suggestion by Brian from Japan.

Jews in the News: A Jewish NFL coach 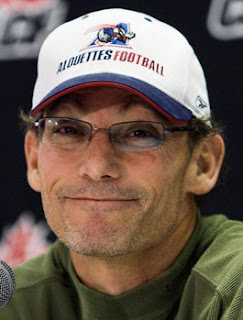 The Chicago Bears have the first Jewish NFL coach since... well, who was the last one? Marv Levy for the Bills?

The Bears hired Marc Trestman, last with Montreal of the CFL.

Suggestions by Jason from Vancouver, David from Wroclaw, Alex from Israel, Gabriel from NYC, and Max from Illinois.

Suggestion by Johan from Santa Monica.

Suggestions by Mila from Alexandria, Don from LA, and Robbie from NY.

When we started this six and a half years ago, not in our wildest dreams did we think we would get to 1500 profiles. Heck, we didn't think we'd get to 100.

Yet somehow, we got to that 100, and then 100 more, and 100 more, and before you know it... here we are. We have our readers to thank; there is absolutely no way we could keep it going without you, dear readers! Your suggestions and feedback are the fuel of our website.

Suggestions by Jake from Philadelphia, Theo from Vienna, and Johnny from California.

Suggestion by John from Australia, who says "not all Australians are like Mel Gibson". Of course, not! Some of them are like Paul Hogan...

Suggestion by Norman from Bellerose, NY.

A boxing champion with the last name Perez... a TUNISIAN Jew???

Suggestion by Yosef from Israel.

Suggestions by Bruce from LA, Greg from Seattle, Sam from Boston, and Jay from Baltimore.

For those who missed our old schools Olympics profiles...

One of our readers, who has helped us out with a couple of tricky problems in the past, has started a French-language blog dedicated to the "Not a Jew" part of the equation. Allez!
Posted by Zev at 7:31 AM 2 comments:

The current Channel 11 hostess is Jodi Applegate, who is married to Michael Kay -- Not a Jew, please stop asking!