The order we post the profiles is pretty much the order we write them in... But to have a Supreme Court judge follow Daphne Rosen? That was intentional.
Posted by Zev at 9:13 AM 2 comments:

Ordinarily, at this point, we'd link some photos or video or whatever of our profilee's work, but in this case we'll just leave it to you, our intrepid reader, to satisfy your own curiosity...
Posted by Yakov at 8:59 AM No comments:

Danny Elfman is related, but not by blood, to actress Jenna Elfman, who, for those wondering, and if you're reading this, you most likely are, is not Jewish.
Posted by Zev at 9:14 AM No comments:

The NBA season starts today, so seems a perfect time to profile arguably the best Jewish player in NBA history.

Schayes was suggested by Joel from California, Howard from Washington DC, and Andrew from San Francisco.
Posted by Zev at 9:18 AM 1 comment:

Here's the podcast, the Jew or Not Jew talk starts about 25 minutes into the discussion. Yakov was actually on the airplane when he heard this, and it took two stewardesses to calm him down.

Oh, and Bill? Scarlett Johansson.
Posted by Zev at 9:05 AM 4 comments:

Jews in the News: Ivanka Trump is a Jewish wife

We get a lot of requests to profile Donald Trump from the "rich = Jewish" crowd. Ummmm. No. Donald Trump = Not a Jew.

But his daughter, Ivanka, is! Ivanka converted to Judaism for fiance, and now husband, Jared Kushner. 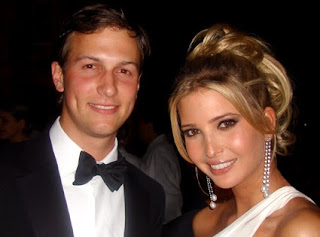 If only this happened when "The Apprentice" was at its peak, she would have made a worthy profile. Now... meh.
Posted by Zev at 8:44 AM 1 comment:

When I said I can get half a dozen profiles from Ingolorious Basterds, little did I know that Christopher Waltz would be one.

So once again, a profile which would not have been possible without help from a reader. This time, Joe from Scranton.
Posted by Zev at 9:06 AM No comments:

When consulting an Indian co-worker on exactly why all Bollywood movies burst into song, he said one of the reasons is to... relieve sexual tension. Hmmmm.
Posted by Zev at 9:08 AM No comments:

What is this, obscure Jews named Arthur week? One of the toughest photo finds in JONJ history.
Posted by Zev at 9:03 AM 2 comments:

Yakov is proclaiming Artie the most obscure JONJ profile ever. I'm still going with Alan Veingrad.
Posted by Zev at 9:04 AM 1 comment:

A big thanks to Mara from Kansas for finding the link between Napoleon and Jews.
Posted by Zev at 9:03 AM 1 comment:

We finally have our shortstop--and contradicted our Ben Zobrist profile--so we should be happy right? Yeah, not so much. We still need a current shortstop (heck, we'll settle for one that's still alive) to complete our All-Jew Baseball Fantasy Team. Until then, we're convinced that Jews and shortstops mix like pastrami and mayonnaise.

Thanks so much to Bill from Miami (for the initial suggestion) and to Jim from Tampa (for the suggestion in response to Zobrist) for making sure Boudreau made it onto our lineup card.
Posted by Yakov at 9:05 AM 1 comment: 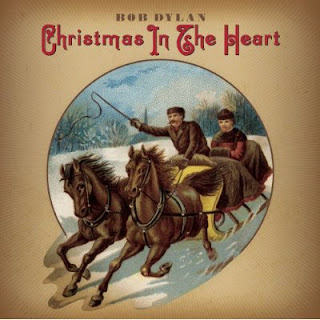 Since the profile was posted, Bob Dylan has probably been our most contentious verdict.

How many times has a dedicated reader sent us the same YouTube clip of Bob Dylan at temple? Or playing Jewish music on stage? Or the articles about his attendance at Long Island shuls? How many times has Moishe himself said to me, "You have to rewrite the profile. You have to change the verdict. You must re-score the score?" And every time I resisted. "Not enough evidence," I said. "Never converted back," I said. And oh how they laughed—silly stubborn Yakov.

Therefore, you can call this newly released (as of October 13) album "Christmas in My Heart" by Bob Dylan.

If college projects counted towards the Erdos numbers, mine would be 4. Yeah, it's a cheat, but it beats my Bacon number...

Thanks to Karyn from Montreal for the suggestion.
Posted by Zev at 9:09 AM No comments:

We've had a neat little streak going here at JONJ: Monday was Leonard Cohen, Tuesday was George Cohen and today is George Michael. The next step would be to have someone named Michael run for tomorrow and keep the streak alive but sadly, looking at the next six weeks of profiles (and yes, we've actually got that many written and waiting to be published), there isn't one Michael waiting to take that spot.

Thanks to Liz from Lexington, MA for the suggestion!
Posted by Yakov at 9:04 AM 1 comment:

I'm sure we'll be able to find a real Jew among the 32 participating teams at next year's World Cup... Right? Right?
Posted by Zev at 9:07 AM 2 comments:

Believe it or not, Leonard Cohen is the most-requested profile in JONJ history. Among the requesters (and what an international group!): TS from Toronto, Chris from Leeds, Mal from Tel Aviv, Jesse from Brooklyn, Abby from France, Simon from Liverpool, and Sten from Germany.
Posted by Zev at 9:07 AM No comments:

For the record, I only have one uncle, and he's been happily married for 35 years. Also for the record, this is the second Jewish uncle analogy we've made (Larry King).
Posted by Zev at 9:13 AM No comments:

Reader Marcia from Westchester suggested we profile Mr. Sabato, Jr. One of those absurd suggestions, we immediately thought... Little did we know. Thanks, Marcia!
Posted by Zev at 9:04 AM 1 comment:

Jews in the News: Ada Yonath wins the Nobel 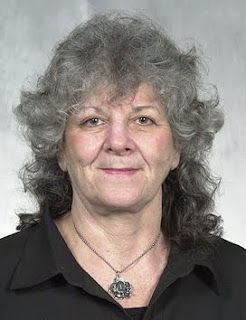 The Nobel Prizes are given out this week, and we have our first Jewish winner of 2009: Ada Yonath of Israel, who shared the Chemistry prize with Thomas Steitz (Not a Jew) and Venkatraman Ramakrishnan (Definitely Not a Jew).
Posted by Zev at 10:37 AM 4 comments:

How's THAT for service? We complain about the lack of good Family Guy Jews on a Friday and—voila—we get the revelation that Lois Griffin is Jewish that very Sunday. There's a Family Guy joke that goes with this kind of wish fulfillment that involves a naked, crab walking Lindsay Lohan, but I'm pretty sure no one wants that anymore.

In a (somewhat) related note, image searches for Lois lead to some...interesting discoveries. People clearly have too much time on their hands and not enough contact with actual, three-dimensional women. NSFW, indeed...
Posted by Yakov at 9:12 AM No comments:

On NYC's Channel 5, TMZ is on at 6:30, preceding Simpsons at 7. So quite often you can't help tuning in at 6:58 and seeing two minutes of Harvey discussing stalking celebrities. I learned my lesson; the mute button is now used immediately.
Posted by Zev at 9:14 AM 1 comment:

We're not kidding either... Reader Meredith from Rhode Island wanted us to profile Hamm "just cause he's hot!"

Jews on Mad Men: no, not Don Draper... Hmmm. Well, creator Matthew Weiner, but as far as characters and actors are concerned... Rachel Menken from Season 1, of course, and Maggie Siff, the actress who played her. And... That's it?
Posted by Zev at 9:19 AM No comments: 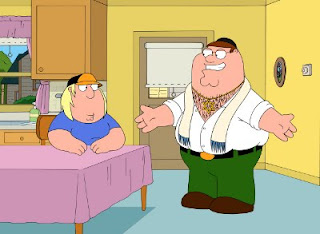 How is this for timing? With Mort Goldman still the lead profile on JONJ, "Family Guy" runs with a "Peter becomes Jewish" episode. We'll have more on the subject soon.
Posted by Zev at 10:28 PM 2 comments:

Well, the title sounds definitive. But let's read on.

So it looks like the Ayatollah son's original claim (and the source of our profile) that Ahmadinejad was once Sabourjian just might be true. But what does that mean?

Well, the article claims that "Sabourjian" means "weaver of the Sabour", a step up from simple "thread painter" that was the previous translation. And a Sabour is "the name for the Jewish Tallit shawl". Ahmadinejad is Jewish, QED. Right?

Not so fast. Point one: remember the source. This is coming out of Iran, and we all saw how much truth came out during their current election. So one has to take everything with a grain of salt, especially anything involving Iran's major players.

Point two: interesting change in translation. So a Sabour is a Jewish shawl? And now, let's say... a section of Pakistan, a country neighboring Iran? We don't claim to be experts on Iranian last names, but shouldn't this version be considered?

Point three: OK, so let's say that his father's last name was Sabourjian, and let's say Sabourjian is a Jewish last name. Fine. Is there any proof his father was Jewish? No. So how many generations back does that go? Let's compare Sabourjian to a recent blog topic, NFL wide receiver Julian Edelman. Yes, Edelman is a Jewish last name. Yes, Edelman has Jewish ancestry. But is he himself Jewish? No. If (when) we profile Edelman, he will get a "Barely a Jew" verdict.

However, we doubt that he will ever acknowledge his supposed Jewish roots... be they real or imagined.
Posted by Zev at 7:33 PM 2 comments:

In case I haven't been clear enough in the above profile, let me just say that I really and truly hate Mort Goldman in the kind of angry and and definitive way that only happens with a fictional character.

There's nothing wrong with making fun of Jews—we're doing it every weekday, after all—but at least try to say something unique or interesting instead of just regurgitating the same dumb jokes that everyone else has done a thousand times. Then again, that's what EVERYONE gets after Family Guy for and while it's the truth, somehow that lack of originality doesn't make the show any less funny.

We're not usually fans of Anglicizing one's name... but Frumkin -> Franklin? It's a good change.

It's a nice profile from Ernie, but... well, it doesn't delve into Franklin's Jewishness as much as we usually like. Oh well. With some people, you can't ask for everything...
Posted by Zev at 9:17 AM No comments: