"What good is money if it can't inspire terror in your fellow man?"
Posted by Zev at 9:01 AM 1 comment:

The brilliant, disturbed, and reclusive Salinger passed away today at the age of 91.

Other JONJ profilees to die after being profiled: Marcel Marceau, Paul Newman, Bobby Fischer, and Robert Novak.
Posted by Zev at 7:28 PM No comments:

It's snowing here in Jersey, which means that everyone drives 15 mph and the usual 20 minute commute takes an hour. And it also means that in front of my office building, I was greeted by a man sweeping the sidewalk, who was wearing something like this: 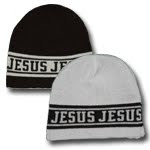 Oh, those meshuggenah goyim!
Posted by Zev at 9:34 AM 4 comments:

I was watching TV one Saturday night, flipping the channels, and Wanda Sykes' show on FOX came up. (For those who are unaware, Wanda is the incredibly unfunny comedienne/actress who often fills the quota as the "black woman" in TV and movies. She ALMOST managed to ruin Curb Your Enthusiasm. ALMOST. Where was I?) The show started at 11 PM, which reminded me that MADtv was on at the same timeslot... Canceled, and I don't think anyone noticed.

Alex was suggested by Charles from New York.
Posted by Zev at 8:50 AM 1 comment:

In 1903, Flatow started Judische Turnerschaft, a gymnastics club for Jews. And here he is (on the left) with two other gymnasts. Gotta love the moustaches. 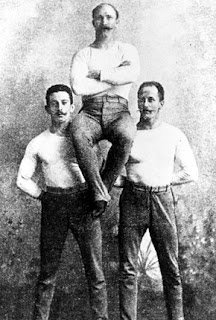 Moishe disagrees vehemently with my decision to include Donna in the list of 90210 characters who are more attractive/popular/glamorous than Andrea. Rebecca from Washington state, who suggested we profile Andrea in the first place and says "[Andrea] is a great Jewish role model," probably agrees with Moishe.

Whatever. Just because they're probably right, doesn't mean I have to listen to them...

So now we've done Abraham, Moses, and David. What other Old Testament characters will fight for that elusive perfect score? No one is queued up right now, but you can count on us returning to butcher more Sunday school tales down the line...
Posted by Zev at 9:01 AM No comments:

What you might not know about the Grammys is that they had a Best Polka category, which was sadly discontinued this year. Sadly for Jimmy Sturr (Not a Jew, we assume) & His Orchestra, who had won the award four years running and 18 of the 24 times it was presented.

Anyway, Drake is pne of our most requested profiles ever, including Levi from New York, AJ from Ann Arbor, MI, Jory and Ben from Omaha, Jason from Pittsburgh, and Jake from Missoula, MT. (Montana!)
Posted by Zev at 8:28 AM 1 comment:

All-time suggestion champ Moishe from La Jolla suggested Chelsea a while ago, but now seems as good a time as any to look into Jews on late night TV.
Posted by Zev at 9:00 AM 2 comments:

Caspar was suggested by Wlodzimierz from Copenhagen. Yes, the Copenhagen in Denmark. Global readership, FTW!

That said, it's a good thing this is a blog and not podcast, because we don't even know where to begin pronouncing Wlodzimierz.
Posted by Yakov at 8:45 AM No comments: 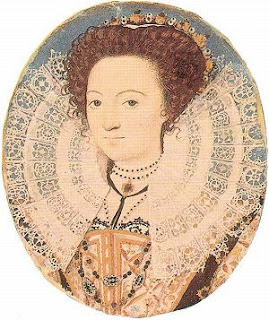 She is pretty much the basis of our Shakespeare profile, but the Italian/Jewish woman who some think was the author of the Bard's plays, Amelia Bassano Lanier, is the subject of this article in the Globe and Mail.

Thanks to Joe from Scranton for alerting us.
Posted by Zev at 8:33 PM 1 comment:

"Bloom" is often a Jewish last name, but this part-time pirate and elf never struck me as even remotely Jewish. For a good reason, it turns out.

Thanks to reader Bob from Illinois for the suggestion.
Posted by Zev at 9:04 AM 2 comments:

With Conan O'Brien in career limbo right now, what will happen to poor Triumph?

Robert Smigel, who performs Triumph and spent over two decades writing on SNL: Jew, of course.

Big thanks to Carla from Ohio for the suggestion.
Posted by Zev at 9:00 AM 3 comments:

Annie is one of those profiles that's been sitting around in the queue for a loooooong time. We just couldn't think of anything to write about her. While she sat around waiting for us to get creative, Brian from New Jersey and Michael from Washington DC were kind enough to remind us she that she deserved a place on our prolific little website.

The stories from the above profile, BTW, are all true. Sadly.
Posted by Yakov at 8:53 AM No comments:

In case you can't tell, I love profiling obscure old school Jewish athletes. I guess Abrahams is not as obscure as some others because of the whole movie thing. Anyway...
Posted by Zev at 9:03 AM No comments:

Recently, we got a number of emails regarding the Jew Score and verdict of Simspons' anchorman, Kent Brockman.

Paul from Toronto writes: You took away marks for Brockman appearing in church as compared to Krusty. However, Brockman also walked around sporting as big star of David necklace. Krusty would never do that.

Dan from Framingham, MA writes: I know Kent Brockman is profiled but your dead interns neglected to spot (not sure of the series #) Kent wearing a humongous chai necklace. I'd upgrade him to Jew.

Todd adds: I do not recall him showing up in any church scenes, but I do know that he was seen to wear a "chai" medallion when answering the door to his mansion. That's got to count more than a brief glimpse at a church service. I obviously need a girlfriend.

Yes you do Todd, yes you do.

First of all, we're glad that our readers are as concerned with the Jewisness of obscure fictional character as we are. But here's the thing: it's obvious to us that even though Brockman was born Jewish Kenny Brockelstein, he converted. Chai necklace? There are non-Jews who wear Jewish jewelry (here's the perfect example). And now he tries to hide his Jewishness, rare appearances of his roots be damned.

Olbermann has specifically stated on his show that he is not Jewish. But when given an opportunity to reminisce about the time ESPN was just your ordinary cable network that showed Australian rules football at 2 in the morning...

Thanks to Lauren from Denver and Tom from Florida for the suggestion.
Posted by Zev at 9:09 AM No comments: 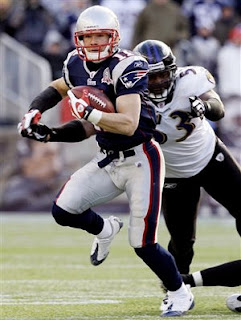 We stopped our Weird Search of the Day last April, but this pretty much summarizes it. That being said, could one of the other nine be profiled one day?

Take Bill Gates, for instance. He is one of our most requested profiles ever. Bill freakin' Gates. There is absolutely no way he's Jewish; why would anyone think otherwise? Oh, because he's super-rich. OK. All super-rich people are Jewish? No, no, no, no, no.

Yet clearly, people want to know. Or maybe they just want us to write something interesting. And Gates is not even the worst one out there. Obama? Bush? Tom Cruise? No, seriously, Tom Cruise? We profiled Jerry Maguire where we clearly stated he is not Jewish (as if that was even necessary in the first place), shouldn't that be enough?

But here's the funny thing: the more people search and request, the more of a chance that we cave in. Sigh.
Posted by Zev at 8:50 AM 2 comments:

So no, no Rockefeller, be it John, Nelson, or David were/are Jewish.

Various Rockefellers were suggested by Stan from New York, Kanovic from Prague, Sek from Tokyo, and Berger from Israel. (What an international following!)
Posted by Zev at 9:01 AM No comments:

This profile was originally intended for Dmitry Salita (requested by Mitch from Toronto, Leon from Israel, and Sam from Massachusetts). But we mistimed it, and by the time it was to go live, Salita lost his title bout. So here comes World Champion Foreman, previously featured on Jews in the News.
Posted by Zev at 9:01 AM 6 comments:

If you read this wondering why the heck I decided to eat one of those awful Subway pastrami subs in the first place, my only defense is that I was young, a little naive, and I needed the money.

I learned my lesson. Believe me.

Jared was suggested by Ken from Florida who writes that his girlfriend "suggested that I portray (Jared) for Halloween." Ummmmmm. That is....not a compliment.
Posted by Yakov at 9:02 AM 2 comments:

I love baseball, but there are things I really hate about my favorite sport and this is one of them. Fans in particular (through the media which is fed this propaganda by the owners and the commissioner who, remember, was an owner himself) have what I can only describe nicely as an ill-informed opinion on these things: namely that players are overpaid through free agency, thus ruining the "good ol' days" of baseball.

The good ol' days being when the owners made millions and the players struggled to get by.

I've never understood the public's overall opinion on this that somehow the owners deserve every penny they can get and the players don't. Are we paying to see George Steinbrenner or Derek Jeter? Just because it's a game and it's a job we'd all love to have doesn't mean that players don't deserve fair compensation for playing it, right?

Anyway, I could go on forever about this, but it's not a sports column. Suffice to say that even if you are one of those people that believes free agency ruined baseball (and I'd like to see you try to live your own life the way the players were forced to, if you do) then you STILL can't argue Miller's impact on the game.

He should be in the Hall of Fame. He should be honored while he's still alive. It's a farce. And it makes me really hate something that I don't enjoy hating.
Posted by Yakov at 8:56 AM 4 comments:

This profile was all written up and scheduled to go later this month. But with Edelman's potential breakthrough yesterday, this seems as good a time as any. The ending had to change a bit, of course.

Thanks to Nathan from NY, George from Maryland, Joe from Scranton, and Lane from NY for the suggestion.
Posted by Zev at 9:02 AM No comments:

Koch (read the profile for the reference) is one last name that always gives us trouble (Fischer is the other). Could be Jewish, could be German, could be Polish, could be Czech.

Our Office roster: Carell, B.J. Novak, Rashida Jones, and character Toby Flenderson. Will there be more? You bet. (We said Fischer above, right?)