Jews in the News: A priest and a rabbi... 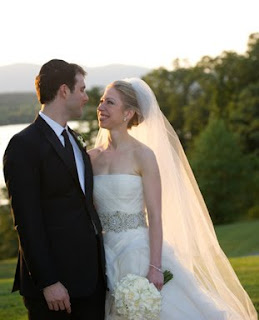 Well, there we go. Chelsea didn't convert. She stayed Methodist, he stayed Jewish. The ceremony was officiated by a rabbi and a priest. He wore a yarmulke. She... did not.
Posted by Zev at 11:24 PM No comments:

Honestly, the Jewish rumors about Bill Clinton are probably the stupidest ones we ever read. Even worse than the ones about Hillary.

Of course, with Chelsea marrying a Jew this weekend, Bill and Hillary just might become Jewish grandparents...
Posted by Zev at 8:45 AM No comments:

Here's the Haaretz article that led to this immediately-written profile.

Thanks to Daniel from Maryland, John from Germany, and John from Boston for letting us know!

Now what's the deal with the apostrophe in the name?

Thanks to the anon commenter for this link that got Amar'e downgraded to "Barely a Jew".
Posted by Zev at 8:45 AM 2 comments:

The perception is that Gould is a Jewish name, where it's really an English variant of Gold. Jewish actor Elliott Gould also changed his name, from Goldstein.

Gould was suggested by all-time suggestion CHAMPS Moishe from La Jolla and Mila from Alexandria.
Posted by Zev at 8:45 AM 1 comment:

So I was browsing Wikipedia's Airplane! page, and for some reason clicked the Lorna Patterson link. What do you know...
Posted by Zev at 8:38 AM No comments:

http://www.jewornotjew.com/profile.jsp?ID=851
We've all heard of Christmas in July, but Hannukkah? Yes, this is more of our belated Winter Olympics profiles showing up. How did I end up writing all of these? Hashem knows. I certainly didn't give a camel's tuchas during the event itself. But here it is.
Anyway, I think that's the last of them. Until the next Winter Olympics, anyway. Then who knows what mystical, magical, completely unexpected Jews (and Not Jews, can't forget them) we'll discover....
Posted by Yakov at 8:46 AM No comments:

Not to be confused with this, of course.

Interestingly, there are three different species known as the "Wandering Jew": tradescantia fluminensis, tradescantia pallida, and tradescantia zebrina.
Posted by Zev at 8:45 AM No comments:

The first woman to be inducted into the French Academy? Marguerite Perey in 1962, half a century after Curie's attempt. The first Jew? Hmmm...

Curie was suggested by Brian from Japan.
Posted by Zev at 8:45 AM 2 comments:

Judy from Atlanta and Nancy from Northern California suggested Spector. Nancy wrote, "he seemed like such a nice Jewish boy"...
Posted by Zev at 8:44 AM 2 comments:

JONJ Recommends... maybe?: The Girl with the Dragon Tattoo

So I heard all the hoopla surrounding "The Girl with the Dragon Tattoo", and its two sequels, "The Girl who Played with Fire", and "The Girl who Kicked the Hornet's Nest". For those not familiar, the books were written by Swedish journalist Stieg Larsson. He never wrote a novel before, and dropped dead before they were published. They immediately became a huge success, a #1 seller in Sweden and throughout Europe, and made their way across the pond. Movies are already out in Sweden, and are due to be remade in Hollywood soon. It's a blockbuster series from a previously unknown author. So I had to check it out.

And... well... how do I put it. Yakov and I always have plot-versus-style arguments. I usually take the plot side. Give me a good plot, and I will cut the author slack if his writing style is subpar. With these books...

Now, I realize what I'm reading is translation. But the translation tries to stay true to the author's style. And...

Moreover, Larsson gives each character a detailed backstory. I understand why he does it, but it's so often unnecessary. For example, detective Jan Bublanski is (AHA!) Jewish. Why is he Jewish? It factors in no way, shape, or form, except for the one incident when he meets another character in a synagogue (which could have been a church, a supermarket, or a train station, as far as the plot is concerned). So why waste pages with his backstory?

But yes, I read all of the books. "Dragon Tattoo" is the best -- by far -- and I would actually recommend it, especially if you want to see what all the hoopla is about. The scenes when the protagonist is spending the winter on an island are actually very well written (you can almost feel the cold), and the mystery he is solving is very intriguing.

But it gets worse from there. "Played with Fire" bored me. "Hornet's Nest" is a bit better than "Fire" but nowhere close to "Tattoo".

Larsson was planning to write seven books before his untimely death. But... well, three is enough for me.
Posted by Zev at 10:34 AM No comments:

Dennis Gabor was suggested by... a Google doodle alerting us of Gabor's birthday.

Thanks, Google! Now how about that offer?
Posted by Zev at 8:45 AM No comments:

We had Rachel Maddow marked as "Not a Jew", but she did admit to having some "distant" Jewish ancestry. So she gets an I Point and a "Barely a Jew" verdict. We like to be consistent, after all.
Posted by Zev at 10:28 AM No comments:

Kaka... make that Kaká, belongs to Jesus, of course: 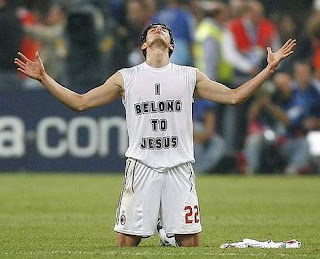 Why the Jewish rumors then? Well, his real name is Ricardo Izecson dos Santos Leite, so Izecson is the Portuguese version of Isaacson, so... Yeah, we're not buying it. Besides, Izecson appears to be his middle name, not his last name.
Posted by Zev at 8:45 AM No comments:

Anyways, "Ask Jew or Not Jew" is back! Here are the previous installments:

This post may seem a little random, but it makes perfect sense to us since Moishe and I both just finished reading Jews with Swords by Michael Chabon. It's pretty good overall (though a little bit show-y in places). I actually preferred it to Yiddish Policeman's Union and Final Solution in Chabon's recent run of genre works, though I'm pretty sure Moishe would disagree.
In any case, the Khazars are fairly important to the novel (novella? novel-ette?) and so, became fairly important to us to profile. Sometimes it really is as simple as that.
Posted by Yakov at 8:42 AM 1 comment:

He's also a hothead, getting into a fight... at a bar mitzvah.

Carter's Tony and Emmy came for the same role, in the Broadway musical "Ain't Misbehavin'" and its TV reprisal.

Carter was suggested by Miriam from California and Suzanne from Washington, DC.
Posted by Zev at 8:45 AM No comments:

We get a lot of suggestions on our website. And sometimes, we have no idea who the person being suggested is. And often in those cases, that suggestion goes by the wayside. But... not today.

Joanna was suggested by Henk from Switzerland and Ajit from Canada, who says "I'm a fan of hers". That you are, Ajit. That you are.
Posted by Zev at 8:45 AM No comments:

We were so sure that Brazil was going to make the World Cup final, we planned a Brazilian soccer profile for today and the upcoming weekend. Well, the Netherlands beat Brazil in the quarters and then topped Uruguay in the semis, putting them into the final for the first time since the 1970s.

Cruyff, of course, is a Dutch all-time great, who was so close to winning the title in 1974.

And who was the Brazilian profile? Stay tuned, we'll deal with him soon.
Posted by Zev at 8:45 AM 1 comment:

Hey look! The Artists category is almost at 20! Who said there are no Jewish artists?

Well, to be fair, not all of the ones we profiled are Jews...

Pissarro was suggested by Frederick from NY, Aaron from Asheville, NC, Val from Redmond, WA, and Steve from California.
Posted by Zev at 8:45 AM 1 comment:

http://www.jewornotjew.com/profile.jsp?ID=838
I'm back baby! OK, I was never really gone. But I have been errant from the blog, I know. Thanks to Moishe for covering for my (admittedly few and far between) profiles in the interim. Where did I go? Oh, a strange and wondrous place beyond the veil of imagination... Oh, who am I kidding. I got a new job and I got super busy getting settled. Hopefully this is a sign that I'll be back to the blog for the foreseeable future. I know it's been extra super hard for everyone to live without my many witticisms. What's that? You didn't even notice I was gone? Oh whatever....
Anyway, we're a little late on the whole Winter Olympics thing, we know, but Johnny was just too Weir-d for us to wait till the next go 'round. So here he is in all his...glory?
Weir was suggested by Lisa from Maryland. Thanks, Lisa?
Posted by Yakov at 8:44 AM No comments:

Never a big fan of Snapple myself. Or ice tea as a concept altogether. The Snapple juices are not bad, except... well, they're not really juices, they got something like 5% fruit juice. So, overall, Snapple: bleh.
Posted by Zev at 8:52 AM 1 comment:

For those not familiar with the tale of The Wandering Jew, it's an antisemitic legend from Christian folklore. Stupid Christians.
Posted by Zev at 8:45 AM No comments:

Believe it or not, Haber is the first Nobel Chemistry laureate we've profiled. We also haven't done Medicine yet. Because Jonas Salk was robbed, of course.

Haber was suggested by Aalis from Germany.
Posted by Zev at 8:45 AM 1 comment:

But some suggestions, like this one from Bernard from Norway, are so... unique.
Posted by Zev at 8:44 AM No comments: