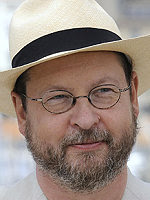 Von Trier was suggested by Nina from Toronto, Francis from Montreal, and Even from Norway.
Posted by Yakov at 9:15 AM