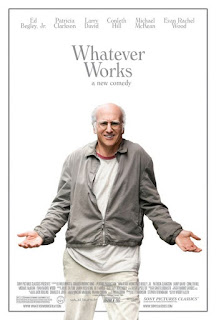 I love Woody Allen. Some might say that his work has declined recently, but his recent string of films ("Scoop", "Match Point", "Cassandra's Dream", "Vicky Cristina Barcelona") have all been excellent. It looks like he has recovered from the lull earlier this decade.

I love Larry David. "Curb Your Enthusiasm" is the reason I subscribe to HBO. And I own the DVD of every season. And the wife rolls her eyes when I say "pretty pretty good" in the David voice.

So, I've been pretty excited about this movie ever I found out it was being made. (Usually, that leads to a letdown. The despicable "The Count of Monte Cristo" starring Jim Caviezel is the prime example.)

Not here. David is hilarious as a genius curmudgeon who makes a new friend in Evan Rachel Wood. (The JEWISH Evan Rachel Wood, who'll probably get her own JONJ profile sooner rather than later.) And Allen's writing is still pretty damn sharp. Critics might point out (spoiler alert!) the yet another May-December romance that is a constant presence in Allen's films (and life), but that's just Woody being Woody.