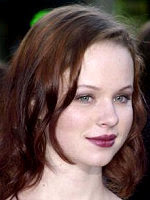 Thora and her father were in the news recently... Creeptastic.

Mr. Birch asked the actor why he was rubbing Ms. Birch’s back during the scene. The actor – whom none of the sides would name – said that he had been directed to do so as part of the scene. Mr. Birch objected, saying that the back rub was unnecessary, and told the actor to stop.

Birch was suggested by returning suggester Cristela from Lima, Peru.
Posted by Zev at 8:45 AM