Jews in the News: All of us 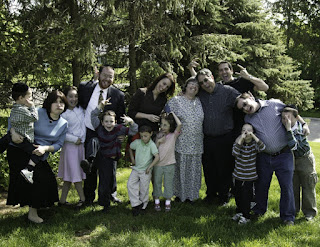 According to this article,

DNA shows that today's Jews from the largest group, the eight million Ashkenazim – most of whom once found their home in central and eastern Europe, and who now represent the majority of American Jews – have few grandmothers. Around half descend from just four women who bear mitochondrial types found almost exclusively in that population. Two million trace their descent from just one of those ancient predecessors.

So, basically, if you meet four Jews, odds are you're CLOSELY related to one of them. Terrific?
Posted by Zev at 8:53 AM