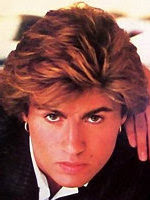 So, a genealogy blog debunks that George Michael is (part) Jewish... Sort of. We previously read that he had a Jewish grandparent, but the blog concludes:

[L]ikely there is a maternal ancestor on George Michael's family tree who was indeed Jewish, so it was the case that his grandmother Daisy Angold Young was of Jewish descent some way back.[1]

Thanks to Dave from New York for alerting us.
Posted by Zev at 8:02 PM