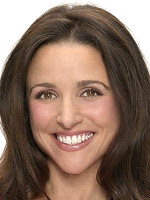 Originally, our profile posed the question, is Julia's mother Jewish? Thanks to reader Michael, we are now pretty sure she is not (see Julia's maternal ancestry here). But that still leaves Julia herself.

Update: thanks to the commenter and this video. So no, she doesn't consider herself Jewish. "Barely a Jew" it is... And a profile re-write. Oh well.
Posted by Zev at 11:20 PM