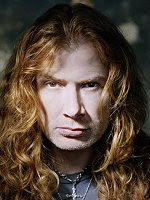 On the other hand, he takes a hard line born again Christian stance while playing for a band called Megadeth without seeing the irony, so maybe he deserves his lot...
Posted by Yakov at 8:45 AM