Jews in the News: Colby and Zack Cohen 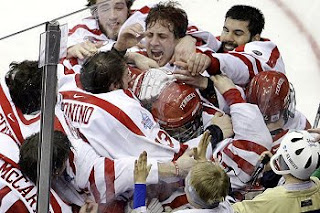 Those of us who love to watch college hockey (currently listed as an endangered species by the WWF) were treated to a heck of a championship game Saturday night, with the Boston Jewniversity Terriers taking down Miami (of Ohio, don't freak out about tropical hockey) in the finals, 4-3.

I won't do the whole game story thing, that's here, but with a minute to go in the last period, BU was losing 3-1. A minute later, tie game. Then BU put it away in overtime. Good times. Those last 3 goal scorers were, in order, Zack Cohen, Nick Bonino, and Colby Cohen.

Now the key question (because otherwise this is just an excuse for me to bask in my alma mater's hockey glory), are two of those goal scorers Jews? Are they even related?

I have no idea. Colby Cohen is admittedly dubious, what with the Colby and all. I'm a little less willing to dismiss Zack, though. And really, just the act of playing hockey makes me skeptical. The always reliable Interwebs are mum—frankly, I'm stumped. If anyone knows please let me know, but for now...well...after Saturday night, you can probably guess where I'm leaning...
Posted by Yakov at 3:24 PM