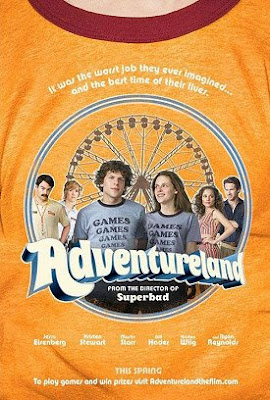 Had the chance to catch Adventureland over the weekend and enjoyed it quite a bit, actually. If you go in expecting Superbad you'll be disappointed--Dazed and Confused is a closer correlation-- but overall it's a fun film that makes you wish you were young again and at the same time makes you really happy you're not.

More important is this celluloid confection's surprisingly Jew-y filling. Both the best friend (Joel, played by Martin Starr) and the love interest (Em Lewin, played by Kristen Stewart) are Jews and quite likable characters at that. The Lewin character, in particular, is a pleasant revelation because her Judaism isn't played for laughs or even really for plot. The character is simply Jewish because, well, that's who the character is.

A sweet surprise in what turned out to be a fairly sweet movie.