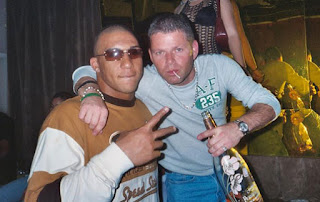 Nevin Shapiro, on the right above (nacht), in jail for running a Ponzi scheme, admitted to some of the biggest violations in college sports history.

Shapiro described a sustained, eight-year run of rampant NCAA rule-breaking, some of it with the knowledge or direct participation of at least seven coaches from the Miami football and basketball programs. At a cost that Shapiro estimates in the millions of dollars, he said his benefits to athletes included but were not limited to cash, prostitutes, entertainment in his multimillion-dollar homes and yacht, paid trips to high-end restaurants and nightclubs, jewelry, bounties for on-field play (including bounties for injuring opposing players), travel and, on one occasion, an abortion.