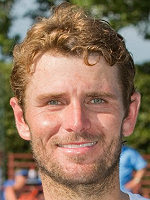 Update: No, not a Jew. He is listed all over the Intertubes as Jewish, but... no. Just the wife. Profile has been re-written.


I just got of of the telephone with Tom Fish, Mardy Fish’ father. He said they would be very proud if he was of Jewish heritage but he is NOT nor does he have any Jewish history in the family. Mardy’s wife is Jewish but he did not convert. Tom said he is tired of correcting Wikipedia and has given up.

Mardy's best Grand Slam showing so far is the quarterfinals, but he did win an Olympic silver in 2004, losing to fellow Jew (what are the odds!) Nicolas Massu in the final.

Fish was suggested by Steve from Montville, NJ, Martin from Salt Lake City, Ed from Florida, Leon from Botswana(!), and Valerie from Scarsdale.
Posted by Zev at 9:15 AM