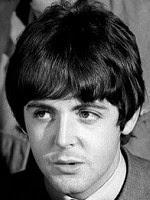 The former Beatle’s first wife, LINDA EASTMAN, came from a prominent Jewish family and McCartney had talked about converting after they married, but just never got around to it.