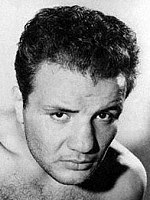 There has been a lot of back-and-forth on the possible Jewish mother of boxer Jake LaMotta. There is some hearsay on the web that she is Jewish. And then LaMotta and his own son contradict her Italian origins: one claims she is from Trieste, the other that she is from Sicily.

We're not sure if the following clears it up, but apparently LaMotta himself claimed -- to TotallyJewish.com! -- that she was Jewish. So, until further notice, he is at Borderline Jew.

Nicknamed "The Bronx Bull", and portrayed in Robert De Niro's 1980 film "Raging Bull", Boxing legend Jake LaMotta not only had a Jewish mother, but as he revealed to TJ, has also married four different Jewish women.