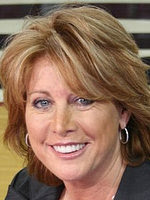 Nancy Lieberman just might be the greatest women's basketball player ever. She was born Jewish, and considers herself so, here's from a 2010 interview:

I am 100% Jewish. My father’s parents were deeply religious, we had two sets of silverware when we went and ate over there. My mother’s side observed the major holidays. It was more relaxed. I went to Hebrew School as well. [...] I consider myself a progressive Jew.

However, she does consider herself Jewish... Borderline Jew it is.