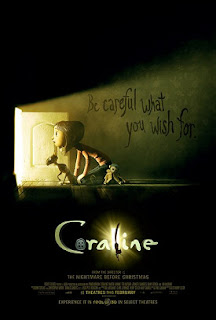 We're really big Neil Gaiman fans here at JONJ. American Gods and Stardust are terrific. And Yakov will vouch for The Sandman.

I read Coraline last year, and loved it. A modern-day Alice in Wonderland... and I love Alice, so much so that I spent weeks trying to find a Jewish link in it, failed, and went and profiled Humpty-Dumpty anyway. (Wait, what's with all these "love"s? That doesn't sound like me at all.)

Well, the movie is as good. There are some changes to the book... the story is moved from England to Oregon, and Coraline now has a friend, Wybie, but these changes are minor and do not do anything to harm the movie (as opposed to... well, we'll deal with it in JONJ Does Not Recommend later).

So, what else can we say? The story is great, the animation is good, it's scary, and wonderful, and there are dancing mice... Go see it if you have the chance.