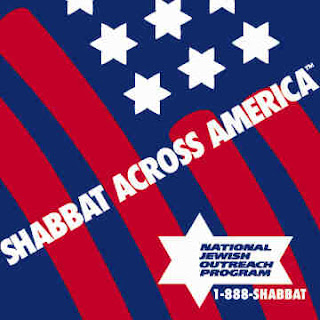 We get hate mail sometimes. Shocker, I know. Picture the most likely responses to a site such as ours and, pretty much, those are the ones we get. Personally, I consider it the price of doing business.

Anyway, one running theme is when we pick on people for pushing their Christianity (Say, Kurt Warner, to name a completely hypothetical person we've received a letter about), we get angry letters. "You wouldn't beat up on Jews for that," they snarl (usually with more typos than I'm willing to abide in my own writing).

And that's the thing, actually, we would. We do. One of the big things about Judaism that people from other, more missionary driven religions don't seem to understand is that we don't sell our religion. Ever. Advertising is verboten (which is surprising considering how many of us are actually IN advertising).

So when I was listening to the radio yesterday morning and heard the National Jewish Outreach Program's ad for Shabbat Across America, I didn't celebrate. I cringed.

We're Jews and part of that means we don't treat our faith like the religious equivalent of a Toyotathon. Our relationship with G-d is a private, personal thing. And just like any other personal relationship, we don't go around broadcasting it to millions of people, inviting them to join in.

And we certainly don't write a motherf***ing theme song about it.