Update: The Mystery of the Batwoman 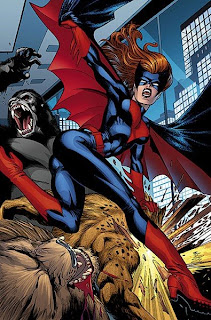 Back in December we wrote about the various minority reboots currently residing in the DC Universe. Since then, Latino Blue Beetle's comic--the last of the group to survive--has been cancelled, though he's been very prominent and well written in the (recommended) Batman: Brave and the Bold cartoon series. Black Firestorm has been added to the roster of the Justice League of America and appears there semi-regularly. Asian Atom has been relegated to 1-panel cameos in majore events. He was last seen contemplating a name change. Interestingly, the only B-hero reboot that is being redacted is the one they left as caucasian: Aquaman.

That leaves Jewish, lesbian Batwoman and--wouldn't you know it?--she's doing quite well for herself. A few weeks ago, at the NYC Comic Con, DC announced that Detective Comics would become Batwoman's title as part of a massive reshuffling of the Batman books. Whether this will be any good or not is, at best, up for debate, though they did pick the right writer, the ever-talented, noir master Greg Rucka (not a Jew).

We'll see how long this lasts (guess: not long), but it is exciting that a Jewish character (admittedly a mediocre one thus far) will be getting her own book. We'll be rooting for her and the inevitable upcoming Chanukah issue where she fights a golem.

When her first issue of Detective appears later this year, we'll post a review.
Posted by Yakov at 9:29 AM